"Columbus Sailed the Ocean Blue in 1492"

The explorer Christopher Columbus was a member of the Roman Catholics and a knights of Christ, successor to the Knights Templar.[1][2][3][4][5]

Colonist set sail in 1584 from England to found the American colonies, including Virginia, named after Elizabeth.

"The name Virginia originates from an expedition sent by Queen Elizabeth I in 1584, noting her status as the "Virgin Queen." Initially, the term "Virginia" was applied to the entire eastern coast of North America from the 34th parallel (near Cape Fear) north to the 48th parallel, including the shorelines of Acadia and a large portion of inland Canada. Although Spain, France and the Netherlands all had competing claims to the region, none of these prevented the English from becoming the first European power to colonize the Mid-Atlantic coastline. To the south, Spain attempted to establish settlements at least as far north as South Carolina."

The Spanish Armada of ships attack England in 1588 to depose the Protestant Queen, Elizabeth I. The fleet sinks in bad weather.[15][16] Movie: Elizabeth, parts 1& 2

Roman Catholics were barred from political office by law in the colonies until after the American Revolution. Maryland was the only Roman Catholic colony.[17][18][19][20][21] 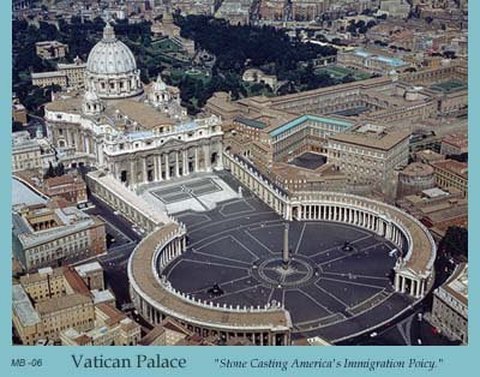 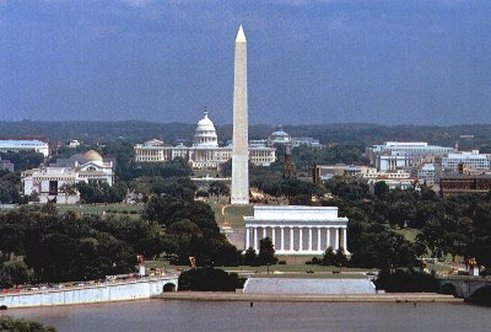 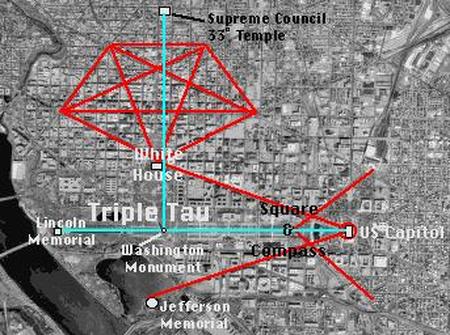 The Catholic Church builds Washington D.C.
"In December 1790, Maryland ceded land selected by President George Washington to the federal government for the creation of Washington, D.C. The land provided to Washington, D.C. is actually "sitting" inside the state of Maryland."

The Knights of Malta's Pivotal Role in the American Revolutionary War

While the American Revolution was led by the Knights Templar of the newly formed Freemasons; Jefferson, Franklin and Washington were aided by the Knights of Malta - all directed by chain-of-command to the Jesuits in America, London and the Vatican.

"When the Congress, at the session held in October, 1784, at Trenton, New Jersey, enacted that a board of three commissioners should lay out a site to be the capital of the nation, Daniel Carroll was named with Thomas Johnson and David Stuart as his associates. The choice of the present site of Washington was advocated by Carroll, and he owned one of the four farms taken for it, Notley Young, David Burns, and Samuel Davidson being the others interested. The capitol was built on the land transferred to the Government by Carroll, and there is additional interest to Catholics in the fact that, in 1663, this whole section of country belonged to a man named Pope, who called it Rome. On 15 April, 1791, Carroll and David Stuart, as the official commissioners of Congress, laid the corner-stone of the District of Columbia at Jones' Point near Alexandria, Virginia. When the Congress met in Washington for the first time, in November, 1800, Carroll and Notley Young owned the only two really comfortable and imposing houses within the bounds of the city. Young's name is among those assisting as collectors of subscriptions (1787) for the founding of Georgetown College."[22][23][24][25][26]

The Jesuit Bishop John Carroll was probably the richest man in America in the late 1700's. Carroll allowed funding to construct D.C. (which is nicknamed "Rome on the Potomac"). The owner of the land used to be Francis Pope and his priest was Jesuit Andrew White (White House).

Washington D.C.'s original name was Rome, Maryland, and a branch of the Potomac River was called Tiber Creek, which was named after the Tiber river in Rome. Like Rome, Washington D.C. has 7 hills, whose names are: Capitol Hill, Meridian Hill, Floral Hills, Forest Hills, Hillbrook, Hillcrest, and Knox Hill.

In the U.S., the big push to canonize or deify the pirate Columbus came after the fall of the Papal States in 1870. On June 1, 1871, the name of the headquarters of the government was changed from Washington City to Washington D.C., District of Columbia. The seal and motto, "Justitia Omnibus" (Justice for All), was adopted for the District of Columbia. The Knights of Columbus continue to glorify this thief, and murderer.

In 1937 President Franklin Roosevelt proclaimed every Oct. 12 as Columbus Day and in 1971, President Nixon declared it a federal public holiday on the 2nd Monday in October

He had three ships and left from Spain;
He sailed through sunshine, wind and rain.

He sailed by night; he sailed by day;
He used the stars to find his way.

A compass also helped him know
How to find the way to go.

Ninety sailors were on board;
Some men worked while others snored.

Then the workers went to sleep;
And others watched the ocean deep.

Day after day they looked for land;
They dreamed of trees and rocks and sand.

But "India" the land was not;
It was the Bahamas, and it was hot.

The Arakawa natives were very nice;
They gave the sailors food and spice.

Columbus sailed on to find some gold
To bring back home, as he'd been told.

He made the trip again and again,
Trading gold to bring to Spain.

The first American?  No, not quite.
But Columbus was brave, and he was bright.